A long campaign of restoration, repair and improvement at Malew Church was celebrated recently with an All Saints Day service led by the Bishop.  The many enhancements include improved accessibility, re-ordering of the chancel, repairs to the organ, redisplay of the war memorial, a new Southern 100 memorial and a new display of the medieval carved stone crosses found in the parish, and all are the result of an enormous fundraising effort by the parish.

As legal guardians of the crosses, Manx National Heritage was involved from early in the project when their removal from the inaccessible gallery above the west door was first mooted.  A number of locations were considered before the north transept was settled upon.

The old display comprised three crosses, one from the church itself and two from ancient keeill sites elsewhere in the parish; in the course of repairs to the exterior of the church a fourth cross was recovered, and a fifth has since been found during archaeological investigations around another keeill in the north of the parish.  All are now on show in a display which also includes the parish church silver.

Pride of place goes to the largest cross, which is carved with a range of interlace patterns - typical of the Norse crosses for which the Island is famous - and scenes from the saga of Sigurd, a famous hero from Scandinavian mythology.  Despite the worn condition of the stone it is still possible to see Sigurd slaying the giant dragon Fafnir, and then roasting the beast’s heart over a fire.

“We are delighted to have been able to help in the process of bringing these important artefacts to a place within the church where they are more accessible to all, and for them to be displayed together with other artefacts, both old and new, that are uniquely relevant to the parish.”

The redisplay at Malew is part of a programme by MNH and interested stakeholders throughout the Island to promote the Manx crosses and to make them more accessible.

“In recent years we have published a formal Statement of Significance emphasising both the importance of the crosses as historical artefacts, and also their continued cultural value to the various communities within which they are located around the Island.  New academic research has been published in books focused on the entire corpus of over 200 crosses that have been found here, and also the latest thinking on the runic inscriptions that are carved on so many of the stones.  We have also carried out a laser survey of all of the crosses, which has allowed thousands of people to visit these unique monuments online, besides providing us as their guardians with a baseline condition survey against which we can check for long term decay or damage.”

All 200 crosses can be seen online (https://sketchfab.com/manxnationalheritage/collections/manx-crosses).  MNH is also currently working with several other parishes on similar projects, including redisplay of the crosses at Andreas, where, as a result of other improvements taking place at the church, the parish donated the old floor-slabs to MNH for use on heritage sites around the Island.

“Red sandstone is a really scarce commodity on the Island today as there are no operational quarries around Peel where it occurs.  Ongoing repairs to the curtain wall at Peel Castle have emphasised just how important a building material it now is for us when conservation repairs of this type need to be undertaken.  We have previously been able to source some red sandstone from a local recycling business, but the gift of this material makes a huge difference in what we are able to achieve, and we are enormously grateful to Andreas parish for their forethought and generosity.” 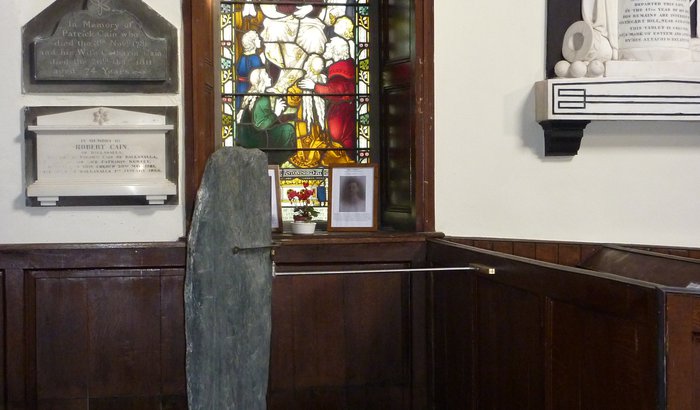 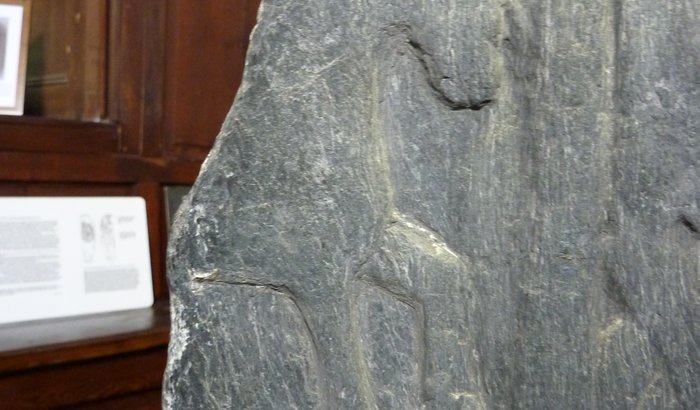 A detail on one of the crosses, showing the outline of Grani, the horse provided to the mythological hero Sigurd by Odin, the king of the pagan gods