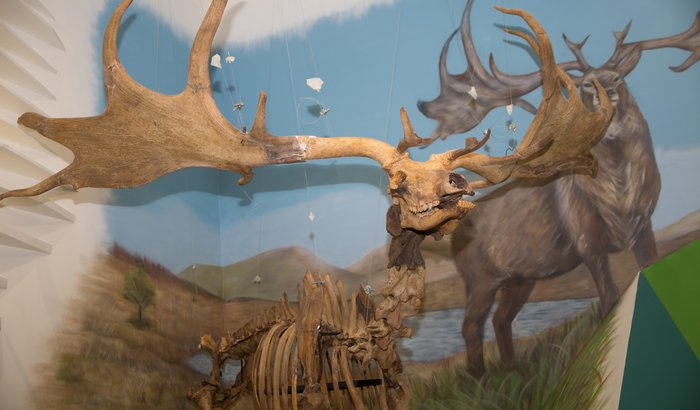 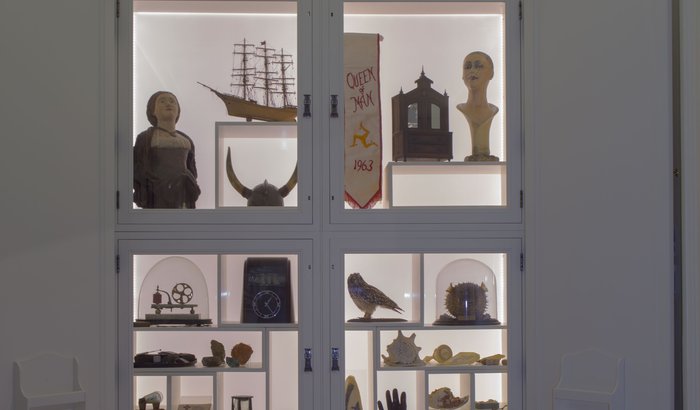 Manx National Heritage, the organisation responsible for protecting and promoting the Isle of Man’s heritage and culture, has opened a new Geology Gallery, Cabinet of Curiosities and Grand Salon at the Manx Museum, the Isle of Man’s national museum.

Visitors can discover more about the Giant Deer that would have roamed the Isle of Man about 11,000 years ago and how the skeleton itself was discovered over a hundred years ago at St Johns. The skeleton now stands proudly in front of a large mural painted by Manx artist, James Duggan, and shows the type of landscape the Giant Deer would have originally lived in and how it would have looked.

Visitors can also discover how the different types of Manx rocks were created, from the sandstones found at Peel to the limestone rocks around Castletown and everything in between.

Working together with on-Island animation studio Mannimation, this story is told through an interactive film showing how the Isle of Man and the rocks which are its foundation, moved across the surface of the Earth over 480 million years. During that time, the Island was part of a deep seabed near the South Pole, was covered with flash flood debris in a hot sandy desert and was even a tropical sea bed. In far more recent times, a mere 30,000 years ago, the Island was blanketed in material swept down from the north by a huge ice sheet.

“Explaining how, over many millions of years, the Isle of Man came to exist as we now know it was quite a challenge, especially in a relatively small gallery. We’ve used different methods of interpretation to help people understand the origins of the Island’s rocks”.

The adjacent gallery and former home to the Giant Deer has been transformed into a ‘Cabinet of Curiosities’ and offers a new introduction to the Isle of Man’s national collections held at the Manx Museum.

Traditionally a ‘Cabinet of Curiosities’ was a room or a cabinet that acted as a ‘museum’ displaying the ‘world in miniature’. In the same way that 17th and 18th century collectors would display their varied collections in a ‘Cabinet of Curiosities’, visitors to the Manx Museum can now uncover a varied selection of the different objects held in the museum collections in one place.

The objects on display come in a variety of shapes, sizes and ages.  They range from a tiny blue glass bead made over a thousand years ago to a Vitascope clock made in Ramsey in the 1940s.   Objects from Manx National Heritage’s social history, archaeology and natural history collections are all included within the display.

One thing that all the objects have in common is that they were used and, or, made on the Isle of Man.  They all have a fascinating story to tell about the Island’s natural and man-made heritage and culture. Visitors can discover just how small a television can be, what makes some white pebbles so important and what the little ‘chicken’ bones really are.

Since originally planning the new gallery to the Manx Museum, the concept of creating ‘Cabinets of Curiosities’ has become very popular around Britain and several museums have created their own ‘cabinet’ displays.  Manx National Heritage created the Manx Museum’s display in the shape of a giant 2m high cabinet. The imposing new cabinet was built in the style of a traditional ‘Cabinet of Curiosities’ by local cabinetmaker, Darren O’Rouke.

The ‘Cabinet of Curiosities’ is surrounded by the new ‘Grand Salon’ display of framed images from Manx National Heritage’s art, photographic and archive collections. Many of these images are now available to view not just at the Manx Museum but also through Manx National Heritage’s online collections on www.imuseum.im and copies can also be purchased online on magnoliabox.com.

“Key features of the new ’Cabinet of Curiosities’ and ‘Grand Salon’ displays are the wide variety of objects that can now be put on display. Some items might be normally difficult to display because they wouldn’t fit into one of the existing galleries or into one of our temporary exhibitions but the object might still have a fascinating story to tell. We now have a space where objects, however unusual or different, can be displayed and their story told.  Where else could you find a giant mint humbug, the Cathedral prison key and a puffer fish in a glass dome on display?”

The new galleries are now open Monday Saturday, 10am to 5pm at the Manx Museum.  Admission is free, with donations welcome to the Manx Museum & National Trust (Isle of Man registered charity number 603).