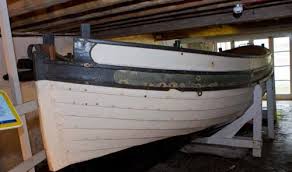 Archaeologists will today start work at the Nautical Museum in Castletown, home of the world’s oldest yacht, the 200-year old Peggy.

“In recent years, Manx National Heritage has been studying Peggy and the environment in which she sits.  The next phase of this project is to carefully excavate the boatyard at the Nautical Museum, where we are expecting to find a slipway leading from the building to Castletown Harbour.”

Starting today, the work is expected to take approximately six weeks to complete.  Following the excavation, Oxford Archaeology North will produce a report on their discoveries for Manx National Heritage in summer 2014.

The Nautical Museum in Castletown is home to the impressive boat – the Peggy – which was found in 1935 concealed in a boat cellar. The Peggy had lain undisturbed for 100 years after her owner, Captain George Quayle, died.

Captain Quayle was a man of great ingenuity and the boathouse he erected has many curious features including trap doors, secret panels and a replica ship’s cabin.

In recent years, Manx National Heritage has been studying Peggy and the environment in which she sits with the help of Cardiff University and conservation consultants Eura Conservation Ltd of Telford.   The exceptional importance of the vessel has been recognised by her inclusion, alongside ships such as HMS Victory, within the National Historic Fleet, the maritime equivalent of Grade One listing maintained by the National Historic Ships Register.

Oxford Archaeology have successfully undertaken some of the most complex archaeology and heritage projects in Europe.  Find out more at www.oxfordarchaeology.com