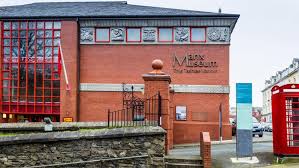 MANX MUSEUM TO OPEN ON SUNDAYS

Manx National Heritage will be opening the Manx Museum on Sundays for the year starting on Easter Sunday 1st April.  This will be a significant addition to the exciting programme of events celebrating 2018 Year of our Island.

The Manx Museum first opened its doors to the public in 1922 and is now visited by in excess of 100,000 people each year.  It is one of the Isle of Man’s most popular year round visitor attractions but until now it has not been open on a Sunday.  That is set to change with a one year trial to assess the sustainability of Sunday opening. The Manx Museum will be open from 10am to 5pm every Sunday from 1st April 2018 to 31st March 2019 (53 Sundays).

“The new Chairman of the Manx Museum and National Trust, Jonathan Hall, and I met with the Minister Laurence Skelly and colleagues from the Department for Enterprise (DfE), our sponsoring Department, late last year to address this specific issue.

Recent audience research has suggested that opening the museum on a Sunday will attract new audiences, particularly those local people who are interested in heritage but have busy lifestyles during the working week. There are several cruise ships already booked to arrive in Douglas on Sundays, and of course this will increase the offer available to the many thousands of visitors who come especially for the TT and Festival of Motorcycling”.

Edmund went on to say:

“The museum already provides a family friendly indoor venue that is open year round but the addition of opening on Sundays will, we believe, further support a longer visitor season and the regeneration of Douglas, including the development of the Cultural Quarter. The visitor economy is expected to feel the benefit of the museum being open on a Sunday with record numbers of organised groups now booking holidays on the island”.

“The promotion of our unique heritage and culture are key to the successful delivery of the Destination Management Plan and in attracting further visitors to the Island.  This initiative will also help us in our ambitions to deliver long-term economic, social and cultural benefits to Island residents and businesses.

The museum offers a vibrant indoor visitor destination and is a fantastic asset for the island.  It will be great to see even more people using it at weekends and we look forward to assessing the results of the trial”.

To increase access, the footbridge leading to the Manx Museum from Chester Street Car Park will be open, increasing accessibility to the museum and upper Douglas, with free parking available in Chester Street every Sunday.

The shop and café will be open during the trial but it is not currently planned to change the Library opening hours.  Admission is free but donations are welcome.