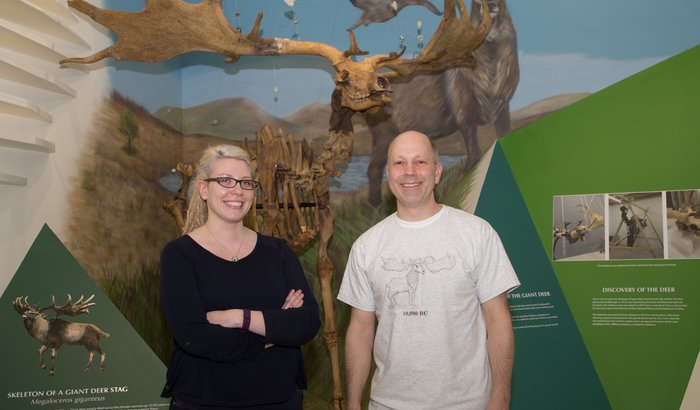 Manx National Heritage, the organisation responsible for preserving, protecting and promoting the Isle of Man’s heritage and culture will host a public talk entitled ‘Megaloceros Giganteus: Conserving the Giant Deer’ at the Manx Museum on Saturday 21 May 2016.

Manx National Heritage Conservator Christopher Weeks will explore the natural history of the extinct Ice Age giants and talk about the Isle of Man as it was twelve thousand years ago. He’ll tell the story of the discovery and excavation of the deer by the Victorian ‘Irish Elk Committee’, a cast of famous British scientists and the amazing craftsmen who reconstructed the skeleton.

Familiar to generations of visitors to the Manx Museum, The Giant Deer Skeleton is a significant and complete artefact that until recently had not been conserved since it was put on display over one hundred years ago.

In 2015, the skeleton was carefully removed from its former display and moved to a specialist conservation facility within the Museum complex as part of refurbishment work at the Manx Museum.

“The skeleton was studied and laser cleaned by both myself and Lucie Graham, Natural History Conservator from Lancashire Conservation Studios. During the cleaning process, we discovered the meticulous and careful work of Caleb Barlow of the Natural History Museum in London, who visited the Isle of Man in summer 1897, at the invitation of Manx antiquarian and historian P. M. C. Kermode to articulate the skeleton.

Over 100 years on, many of Barlow’s repairs needed specialist attention and had to be replaced. Samples of tooth and bone were taken for DNA testing and dating by carbon 14 analysis. With this data we may be able to tie the Manx deer to his cousins in Ireland, Scandinavia and Russia”.

The skeleton was recently re-displayed as the centerpiece of the new Geology Gallery at the Manx Museum.  The talk invites visitors to discover more about his magnificent animal and the recent efforts to preserve its skeleton and uncover its story.