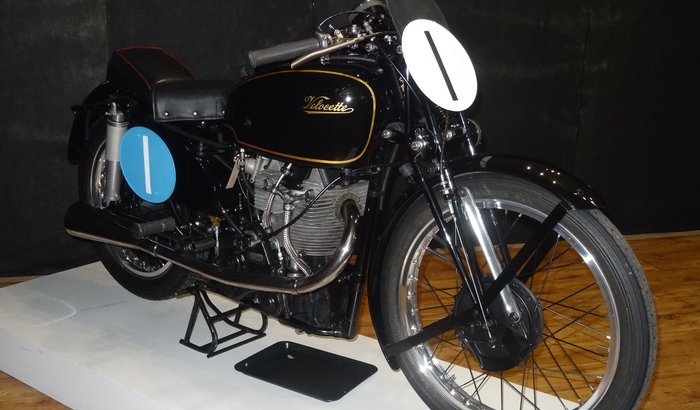 The 350cc Velocette motorcycle, ridden to victory by Stanley Woods in the 1939 Junior TT will be on display at the Manx Museum for TT 2016.

Woods, from Dublin, was one of the biggest stars of the TT in the interwar years and one of Ireland’s greatest sportsmen. He was the first motorcycle racer to reach 10 TT wins which was a major achievement considering that there were far fewer races in the 1920s and 1930s than today. His win at the politically-charged 1939 TT was hugely significant and the only victory for British machinery that year.

Manx National Heritage will also screen ‘Forgotten Heroes’, a documentary about Stanley Woods’ life.   The film includes unique archival footage of his fascinating career and personal life, from racing to his honeymoon, continental holidays and glittering social occasions.  The film will be shown from 30th May to 1 June and 3 June to 12th June at 11am in the Manx Museum Film Theatre.

Stanley Wood’s striking Velocette will be joined by the 1928 TT winning Velocette ridden by Alec Bennett, the 1970 Production TT winning Suzuki ridden by Frank Whiteway and the Suzuki RG500 ridden to victory by Mike Hailwood in the 1979 TT, Hailwood’s last TT appearance.

TT memorabilia from the Manx Museum Collections will also be showcased in ‘Show and Tell Sessions’, which take place at 10.30am and 2.30pm on non-race days from 30 May until 12 June. The sessions will feature leathers, helmets, shirts and other items, which represent TT festival history from 1907 to the present day.

For the first time, ITV’s coverage of the Isle of Man TT will feature on the Manx Museum Big Screen at 3pm daily.  The screenings offer a great opportunity for visiting fans to catch up on the races, interviews and highlights recorded on the previous day.

Well-known TT visitor and former world sidecar champion, Stan Dibben will provide an entertaining talk on Thursday 2 June at 11am. The event will include a screening of ‘No Ordinary Passenger’ followed by a talk by Stan on his career in motorsport including his work on Donald Campbell’s World Land Speed Record in ‘Bluebird’.

Visiting TT fans also have the opportunity to purchase a TT collector’s pin badge, providing entry to all Manx National Heritage sites for the duration of the TT and Festival of Motorcycling.  The badge costs £10, with all proceeds going towards preserving and protecting the Isle of Man’s unique heritage and culture.   Entry is free to all TT Events at the Manx Museum and donations are welcome.

The 350cc Velocette motorcycle, ridden to victory by Stanley Woods in the 1939 Junior TT