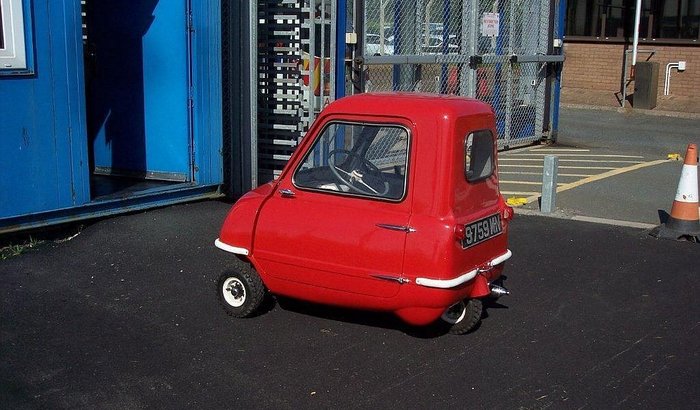 Featuring the famous P50 and other three wheeled vehicles.

On Saturday 23 August 2014, visitors to the Manx Museum will have a special opportunity to see some very unique vehicles and learn all about the only locally produced car, the Peel P50.

The day includes a display of micro cars in the museum car park, including a Bond Bug, an Isetta and other rare three wheelers, as well as the star of the show – the P50, two of which will be on display from 12pm to 5pm.

Local enthusiast Chris Machin will provide a free public lecture entitled ‘Me and my Shopping Bag – the evolution of the micro-cars from WWII to 1960′ at 2pm. The lecture promises to provide around one and a half hours great entertainment and is accompanied by rare footage of these amazing little machines.

“This is the first time I have been able to provide this lecture, which features some interesting and rare footage – not only of the P50 but also the next generation of Peel car – the Trident. I will also explain why micro cars were so important in the austere years following the Second World War. Do come along as this event will appeal to anyone who has an interest in these wonderful, locally produced micro-cars”.

Admission to the Manx Museum and lecture is free of charge, although visitors are encouraged to collect an advance free ticket to the lecture from the Manx Museum.